I Discovered a Fellow Fiber Artist While Watching Alone… Who Would Have Thought? 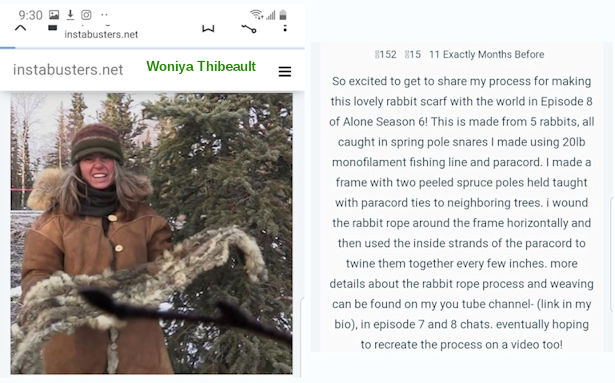 Have you watched the Series Alone? Ten hard core people are dropped off in crazy rough territory to survive, alone, with only ten items while filming themselves.

The goal in the first five seasons was basically to survive as long as you could but I think it was actually a year. They used locations such as the northern most part of Vancouver Island, Patagonia and the Arctic. Yes… the Arctic. Like I said, hard core!

Season Six is located in the Arctic and the goal is to last 100 days starting in September. You always learn some of the most amazing things and quite often there’s also a good laugh to be had.

In Season 6 my favourite person is Woniya Thibeault. She took her time, enjoyed her surroundings and was flexible. She started her camp in one spot, reassessed, relocated and spent some time assessing again before building her excellent shelter. No spoilers … Go enjoy it for yourself.

I’m a habitual fiber artist. I want to learn every technique I see and Woniya amazed me with her creativity! After snaring her rabbits she would painstakingly cut the skin into one continual strip. Once dried she WOVE it into a rabbit fur scarf that she could add to until it became a blanket. I loved catching sight of it slowly growing. I’ll bet it was nice and warm in the Arctic cold! She didn’t make it to blanket size but it certainly did grow.

Well my curiosity was peaked! I searched her out and found her at Buckskin Revolution where she shares her amazing skills. Going further down the rabbit hole (pun intended) I found her on Youtube where she shares some unseen footage from her time in the Arctic. Then I really started stalking her and followed her on Instagram! LOL!

I think in the “Brick and Mortar” world I’d be on a list somewhere…..