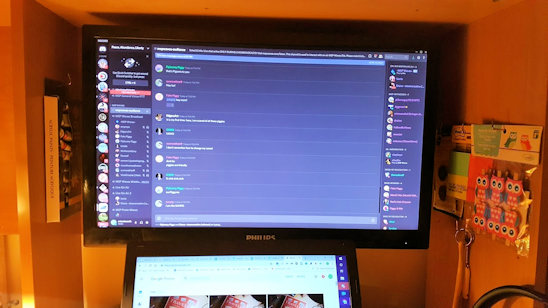 Hey all! Check this out.

Discord in a box? No…I finally hung my 2nd monitor on the back of my desk. I love it!

I was working in my armchair with T.V. tables around me and to be honest… it sucked. Now I’m sitting at my desk, looking out over the city through my balcony doors and wondering why I didn’t pursue this sooner. Well, the answer to that is lack of a decent chair but my hubby found a large pile of square packing foam pieces to redo this old kitchen chair. Who knows? Maybe it will be comfier than my dead office chair. But I’ll work on that in the morning.

For Christmas this past year a good friend gave me a very cool owl light. I’m ashamed to say it has just been sitting in the box waiting for a home. Today I removed everything that is craft related from my desk and to my surprise the Owl light has the perfect new home!

During the repatriation of papers and notebooks, I re-discovered my stamp collection. As my hands touched the worn spine of the large blue binder I instantly felt the years of blurred memories flow through my heart. The stamp collecting bug bit me early in life. When I was 10 Mrs. M., an “old lady” held a very informal stamp club for some of the village children. I loved the stamp club and rarely missed a week.

Mrs. M. showed us the magic of stamp collecting. She taught us history, art, culture, and human nature using Philatelic addiction as her medium. I could “travel” the world with stamps. Every country commemorates their Nationality by showing their way of life on their stamps. Carefully looking through Mrs. M.’s albums, year by year, was like going back in time.
For every year you could see how people dressed, what they drove, what progress they’d achieved and the history they focused on. Time capsules on paper. 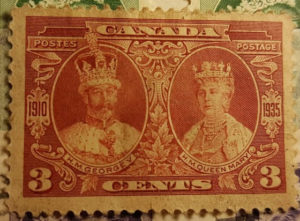 This is the first mint stamp I put into my collection. This stamp was created to celebrate King George V’s Silver Jubilee in 1935. The Canadian Banknote Company, LTD. produced 60,425,000 of them.

It’s not valuable, worth about 75 cents. This one is M-NH-VG which means Mint-Never Hinged-Very Good condition.

We learned all the important ways to preserve our stamps but we didn’t listen. Most of us loved pasting on those hinges and adding them to the pre-printed albums. There was nothing more exciting than seeing those pages filling up! We would eagerly gather into a circle and get out those bags of postmarked stamps ripped from envelopes, waiting to trade. Mrs. M would first talk to us about current stamps that were coming out and what they were about. We would listen patiently, strangely absorbing this information without even realizing we were LEARNING STUFF. 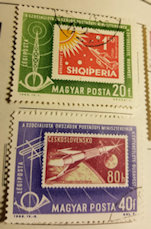 We all had different interests so trading time was fun. No one tried to “one up” anyone. I loved “stamps on stamps”. Don’t ask my why but it appealed to me. You’d be surprised how many countries issue this design.

Part of collecting world stamps is also translating country names. Who knew that “Magyar Posta” meant “Hungary Post”? I don’t really know much about my world stamps because my real focus was on Canadian Stamps. I may research some of them one day. Who knows, maybe sooner than later.

Hungarian stamps were always of interest to me. The details and textures on their stamps were exquisite. 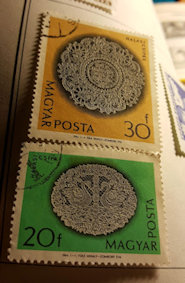 Look at the stamps to the left. The camera couldn’t pick up the texture of the lace. When you run your finger gently over the surface you can feel the delicate design.

Umm Al Qiwain in Western Asia made a stamp that fascinated us. Do you remember those rectangular cards with the plastic pictures that moved when you tilted them? They produced those as stamps! My favorite one was an ocean scene with clownfish that moved. It was pretty neat.

One night, sitting at the kitchen table, my Dad produced a softcover stamp album and proceeded to explore it with me. I was in awe! This was his collection and he had mint stamps from various countries during W.W.II! Then he surprised me. He gave it to me with some strings attached of course. I was just a kid.

I think it was around that time that my parents bought me two stamp albums, a World Album and a Canadian Album. I was over the moon! It took me days to carefully transfer my stamps into the albums and I still don’t care for the taste of stamp hinges. LOL! I don’t know if I ever concentrated on anything the way I did that collection. Stamp Club and collecting took on a new luster after that.

That year @shadowspub bought me a set of First Day Covers of the Canadian Provincial Flags for my birthday. It’s a beautiful set. Each envelope has beautiful pictures and information about the province. And, of course, the stamp of the provincial flag.

The above stamps are part of a set of 12 called, “What Christmas Means to Me”. They were printed in 1970 which was International Education Year in Canada.

Children from across Canada entered their drawings into the competition. The winners not only had the prestige of seeing their art on Canadian postage but they were also given a free trip to Ottawa, our Nation’s Capital.

I think my favorite memory of stamp club was our stamp show. We worked for several weeks organizing, trading and building our displays. We all used bristol board, carefully writing a little info about each stamp beside where it would go and adding color with markers. Mine was, of course, “Stamps on Stamps” but there were “Master Pieces on Stamps”, “Horses on Stamps” and “Transportation on Stamps”.

The morning of the show, wearing our best clothes, we all learned to make tea sandwiches. Fancy finger sandwiches that looked like checkerboards and watercress with cucumber rounds. We mixed creamed cheese with salmon and other savory ingredients. It was so grown up! We made a “proper” pot of tea and set out actual china and silver. When our “guests” arrived we greeted them as we’d been taught and showed them to their seats. To a 10-year-old girl, it was heaven!

Mrs. M., while quirky and sometimes stern was a wonderful person who shared her passion of Philatelics with a group of smalltown kids who had nothing better to do. I often wonder if I thanked her properly before Stamp Club had to end. She opened a door for me that has lasted a lifetime and I hope to pass it on to the younger generation. Maybe my grandson?

I don’t buy stamps on a regular basis but I get the Canadian Philatelic Society publication. When special stamps come out, like the 100th Anniversary of the Sinking of the Titanic and Star Trek stamps, etc., I add a block to the collection. From time to time I get letters from other countries and add those to the collection. I don’t think I’ll ever stop.

What do you collect? 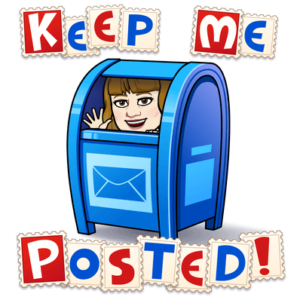